The final instalment of the Picasso series focuses on ‘Nude, Green Leaves And Bust.’ Picasso painted this piece in one day in March 1932 and it sold for a record £70 million in May 2010 at Christie’s in New York.

Inspired by a personal and obsessive love story ‘Nude, Green Leaves And Bust’ hints at the affair between the then 45 year old artist and his mistress Marie-Thérèse Walter. Picasso began and affair with the seventeen year old Marie whilst he was married to the Russian ballerina Olga Khoklova. 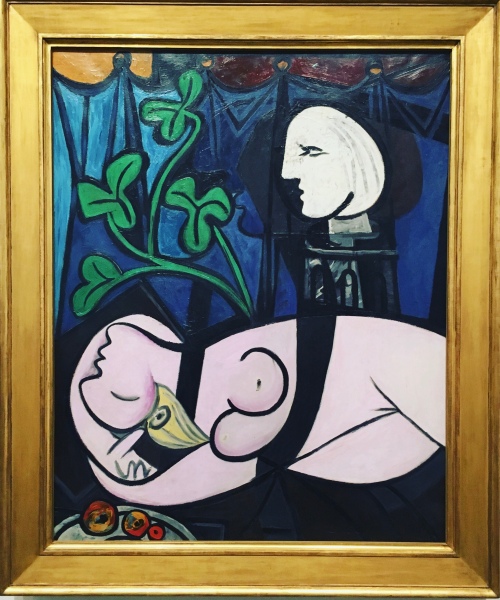 ‘Nude, Green Leaves And Bust’ is remarkably unlike Picasso’s Cubist works from the earlier part of the twentieth century that made him famous. It depicts Marie in a sensual position, lying naked and asleep beneath a classical bust. Her arms are placed up and behind her head, which is thrown back as though in a moment of pleasure.

Above her sleeping figure is a winding philodendron plant which echoes the curves of the Marie’s figure in its meandering tendrils. A profile can be made out in the folds of the blue curtain in the background, which seem to be characteristic of Picasso’s own facial features and so appears as though he is watching over her.

The inclusion of Picasso’s own profile in the painting highlights the surreptitious liaison between them, and the apples in the foreground by her elbow, a time-honoured symbol of sexual enticement, depicts Picasso’s longing for his young mistress and the temptation she posed to him.

A dark shadow over Marie-Thérèse’s body runs from her waist and up and around the watchful bust. The shadow seems to form the shape of the letter ‘P’. A second shadow stems from around her neck and around her head and raised arms to form a second yet inverted ‘P.’ The inclusion of these shadows represent Picasso’s initials and the way in which they are placed over and envelope Marie-Thérèse could represent a desire to possess and claim ownership over his illicit lover.

However, there is a lack of sentiment in the painting. The submissive representation of Picasso’s mistress demonstrates a desire rather than a profound love and offers her on a platform to the viewer as a vessel of objectivity who is submitted to a consuming male gaze by the viewer.